You are here: Home › Can I tell what type of target I have by the GPR signal strength?
By gprtrainingcourses on November 23, 2013 in GPR Training Articles Posts

and the simple answer is no.  This is because the same object can give different signal responses depending on different factors.

GPR signal strength or amplitude is not specific to just a type of target. Signal strength is based on several factors: electrical contrast, object size/orientation, and signal absorption (subsurface conditions).

The object’s size and orientation will affect the signal response as well. Larger objects will reflect more signal and therefore create a larger response. Furthermore, the more surface area that the radar can reflect off of the better. For example, a pipe laid horizontally will produce more signal than a pipe of the same size that is orientated vertically because the radar will have more surface that reflects the GPR signal. 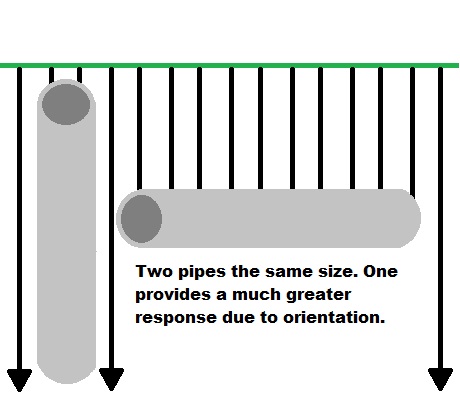 One also needs to consider that as the ground penetrating radar signal penetrates deeper, the signal spreads out farther, a little like looking at an upside down funnel.  Thus, the signal is less focused and absorption of the less concentrated signal reduces the amount of energy that can be returned to the GPR Receiver.  Therefore, the signal response becomes weaker and a larger object will be needed to provide a response.  In the end, if the GPR signal has little penetration through the subsurface, it doesn’t matter what kind of target that you have below it will not likely respond very well.

View all posts by gprtrainingcourses →
GPR Survey Time can be Estimated