Before starting a GPR survey

get a feel for the site and see how the GPR system responds. First, check out known objects to get a feel for GPR limitations. By running without saving, a user can get a good idea of what parameters will work best for a survey.  Take time to adjust the brightness, contrast, and gain. Of course, the user may end up adjusting these settings throughout the day but he or she will start off without having to fuss about the display. Furthermore, if the user produces a nice hyparabola, he or she can use hyperbola matching to set a velocity.

Here is an important pointer

Make sure your SmartCart is calibrated correctly. 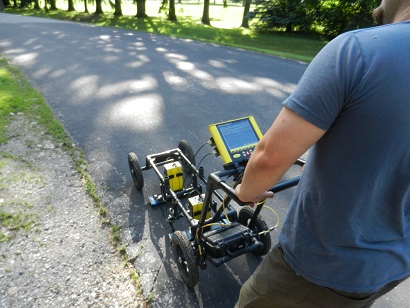 Before creating a GPR Grid, run without saving

Decide whether to run a GPR Grid or Line survey.

Both surveys can be an effective way to locate targets. Line surveys are good for “search and mark” surveys. Often GPR surveyors, mark targets with either fiduciary markers in the software or physically stick flags into the ground. It is important when using fiduciary markers or flags to keep good notes. Obviously, line spacing is important; the tighter the lines are to each other, the more accurately the subsurface is surveyed. If the survey area is small enough, it may be in the best interest to always start each line going the same direction so that the user establishes a consistent and accurate starting point. The figure below shows a Line Survey with lines starting on the Y axis and running parallel to the X axis. These are called X Lines because they are parallel to the X axis. Below it shows the operator decided to alternate direction lines. This might be done on a large scale project. 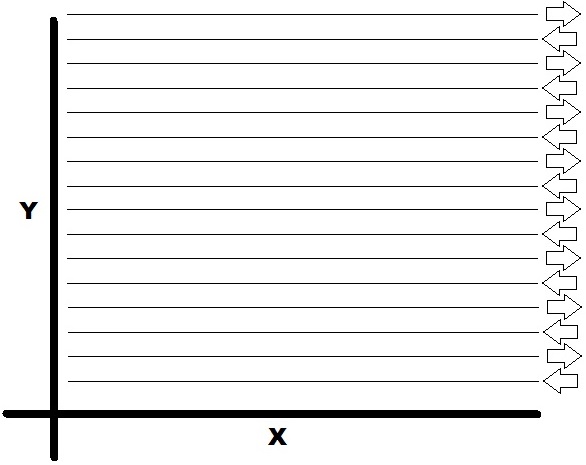 If the user wants a more accurate mapping of the area he or she is scanning, create an XY GPR grid survey. A grid can improve on some factors that other surveys cannot control. GPR grids are more work, but provide more information. Select your grid dimensions and grid spacing for both the X and Y axis. This will determine how many lines the user will need to record. When creating a GPR grid, parallel lines must be close together for smaller targets. It is not unreasonable for the Noggin 250 to have lines spaced 18 inches apart or for the Noggin 500 to have lines spaced every 9 inches. Detailed concrete scanning with a Noggin 1000 or a TR1000 often utilizes a line spacing of 3 inches. Improper spacing can lead to gaps in data and poor post processing images. Again, if possible, start each line from the same starting point to establish a consistent and accurate starting point. If the starting point of a line changes, make sure to keep good notes.

Large, detailed surveys can be broken into multiple grids that are merged together. If the user decides to do multiple grids, he or she must make sure that all the X lines and all the Y lines travel in the same direction to avoid unnecessary post processing issues. Though not required, it is a good idea for the starting point of one GPR grid to be the end point of of a previous GPR grid. 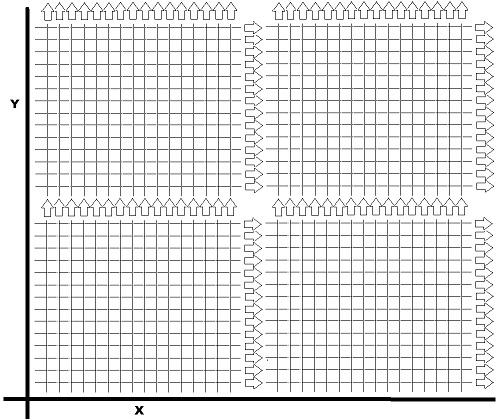 Four GPR grid surveys that will be merged together.

The four GPR grid surveys above would be fairly easy to piece together if each end point was the adjacent grid’s starting point because the X and Y axes travel the same direction on the plot of land surveyed. The four GPR grid surveys below would be much more difficult to merge together because the X and Y lines travel different directions, which create incompatible line numbering and station geometries. 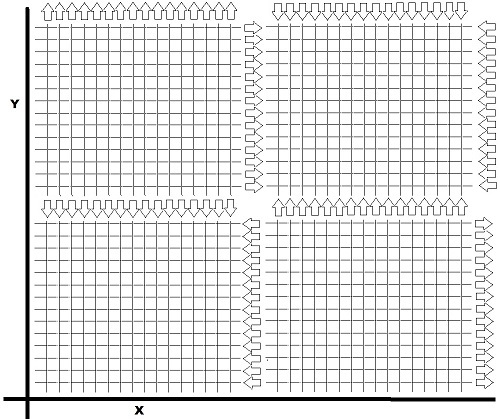 Four GPR grid surveys that would be difficult to piece together.

I decided what kind of survey I want. Now what should I do?

Is the size of your survey too daunting or big to be accurate? Consider making a large survey into multiple line surveys or grid surveys to ensure accuracy.  If starting locations, ending locations, and X and Y axes are consistent, then grids can be pieced together with post processing software. Make sure to keep good notes to know how far grids need to be shifted. When creating a GPR grid, place the four corners of the survey to create a square or a rectangle (visit Wiki). A square GPR grid is often the easiest to create. It is a rectangle with four equal length sides. One of the easiest ways to create a GPR grid without using detailed trigonometry is to create two parallel lines, one on each side of the survey. Then pick a starting point on the first parallel line and an ending point on the other parallel line. Measure the diagonal distance between the starting point and ending point. Now pick a starting point (on the parallel that has the first end point marked) that is nearly perpendicular or across from the first start point. Next, place an end point on the parallel line that had the first start point by measuring diagonally across. Use the distance that was recorded for the first diagonal distance. Now to test how perpendicular the sides are on the rectangle. The distance between the start and end points on each parallel line should be the same. If the distance is not the same move the second start point (along the parallel line that has the first end point) closer or farther apart from the first end point, until the distance between the start and end points on each parallel line are the same and the diagonal measurements are equal. This process is much easier if the user possesses some trigonometry knowledge. If you know trig, you don’t need 0ur help.

Measure the perimeter of your survey and cross-tape the corners for consistency.

Diagonal distances must be equal on a square or rectangular grid. Adjust as needed.

Starting a GPR Grid or Line Survey, a perspective view from one corner of the grid not from above.

Measure the spacings of the lines at both the starting and ending points of each line. GPR lines are often placed using a tape measure and utility flags. Each line of the survey should have the same length. With practice the user will be able to create GPR grids that have different size and shapes. 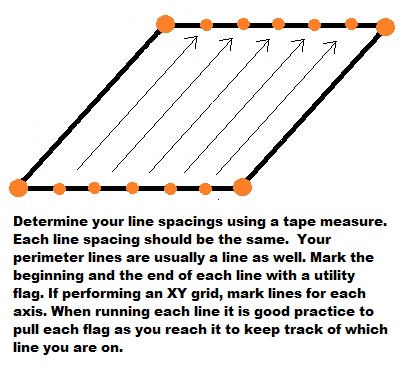 Plotting Survey Lines, a perspective view from one corner of the grid not from above.

Plan for any obstacles. Often areas that are scanned have trees, bushes, stones, memorials, etc that make surveying difficult.  Note where these obstacles are and how you plan to deal with each obstacle. Newer software allows one to stop a line when coming to an impassable object along a line and then continuing the line on the other side of the object.  Older software does not afford that issue.  With older software, one option is to physically pick up the cart, move it around the object without moving the wheel and then spinning the wheel the distance it would have covered if the object was not there.  This will effectively create a “dead spot” in the data and create an artifact in the results, which needs to be blocked out in a presentation because it has meaningless data.  While not a perfect method, it does seem to work if the user careful and keeps good notes about the process.