You are here: Home › GPR Limitations and Considerations

before renting GPR, ask yourself…

what is the survey purpose and its location?

It is crucial to have a well defined purpose before evaluating ground penetrating radar or the GPR limitations. There are many GPR options. The purpose and type of site conditions more or less determine what type of GPR equipment should be used. GPR is not a crystal ball. This means you cannot predict what the object is made of or its location with 100% certainty. Some materials allow greater depths of penetration and reflect radar pulses very well. GPR works best with materials that have a low electrical conductivity, for example air, rock, ice, sand, gravel, plastic, and concrete. GPR has a difficult time transmitting a signal through electrically conductive materials, for example, water, clay, and metal.

What type of soil?

Some soil types might not allow for deep penetration. This places soil conditions near the top of the list of GPR limitations. Check out the GPR Suitability map above or visit NRCS for more detailed maps. Deeper objects generally need a lower frequency antenna to be reached; however, lower frequencies are less detailed, meaning that deeper objects need to be larger to be detected. In addition, electrically conductive, clay rich, wet soils are not the type of soils that lead to great ground penetrating radar records. 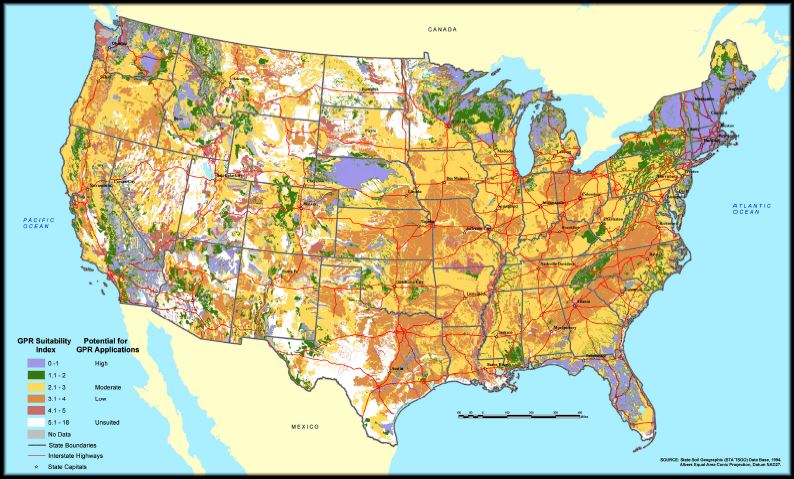 Soils conditions are near the top of the list of GPR limitations. The GPR Suitability Map helps identify potentially poor GPR record areas.

What is the target depth?

GPR limitations include target depth. Many factors control the depth of penetration. The deeper the object the more likely soil conditions, size, orientation, and site access will crop up as one of the GPR limitations that prevent the object from being located.

What is the target size?

In general, larger objects will be found easier than smaller objects. Smaller objects may be found depending on the depth and the target’s uniqueness. Uniqueness meaning the ability to differentiate it from other objects. In ideal conditions, a 24:1 depth to size ratio is a general rule of thumb. So a 1 inch object can be found 24 inches or 2 feet down.  Yet, in concrete, wire mesh that is less than a 1/4 (0.25) inch in diameter may be imaged at depths much greater than 12 inches, which is 48 to 1. In contrast, poor conditions that are not ideal can miss detecting an object altogether. Also consider, if you were looking for a 1 inch object amongst many 1 inch objects, there would be no way to positively differentiate between objects. Keep in mind, an object beneath an object that reflects a large portion of the radar’s signal cannot be seen. With the GPR signal being reflected, disbursed, and spreading out over a larger area, the GPR signal does not reach additional objects at a greater depth.  If the GPR signal does not reach an object the signal cannot be reflected back. Therefore, just because you cannot see an object beneath another object with a strong or weak response it does not mean that there is not an object of concern.

What are the target’s shape and/or orientation?

This is sometimes missed on the list of GPR limitations. If two identical size and shaped objects are in the ground at different orientations, the object orientated so it exposes more surface area to the radar signal will produce a stronger response, because more of the GPR’s transmitted signal is being reflected. The direction of the survey and the target’s shape will alter how an object is seen on the GPR display.  For instance, a round sphere or ball shaped object will create a hyperbola no matter what direction the survey line is running.  However, a linear object, like a pipe, will only appear as a point object if the instrument is running perpendicular to the line. In contrast, the GPR response will appear like a large flat lying object if the GPR transect line is conducted parallel and centered or not to far off of from the center of the buried line. Think about a 2 inch by 48 inch piece of sheet metal. It will be more difficult to detect the sheet metal if it is buried with the flat side facing sideways than if it was facing up and down.  Performing a grid survey and using EKKOMapper can help create a 3D presentation of what is being “imaged” underground.

What are the target’s electrical properties?

GPR limitations include determining how well or easy is it for an object to be detected. If the target has a high degree of reflectivity (e.g. metal), it will return a stronger signal from targets at greater depths. Furthermore, a high degree of reflectivity will make that particular object easier to differentiate from other objects nearby that may be close in size and shape.

What are the site characteristics?

Is there access to use a Noggin SmartCart? pulseEKKO PRO?

Is ground penetrating radar the most economical solution for obtaining results?

Is the site safe and secure?

Site conditions are on the list of GPR limitations because if you can not comfortable operate the GPR equipment on the site, it is of little use. 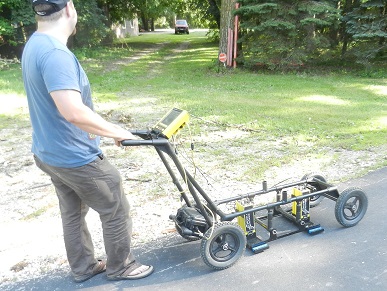