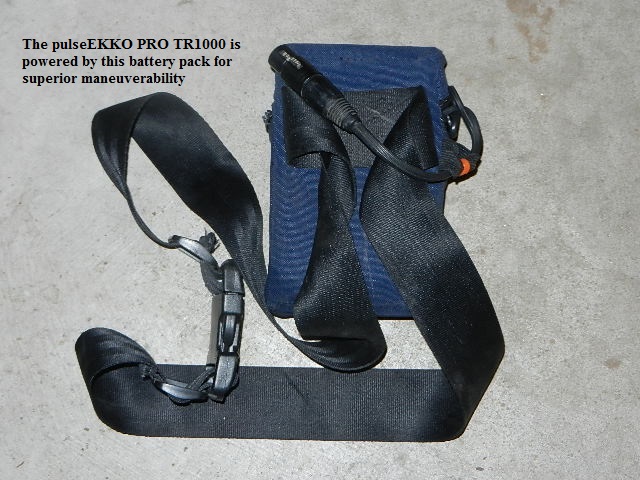 is a 7 to 15 Amp-hour, 12-volt sealed lead acid battery that is protected by a 10 Amp fuse. This prevents damage in case of a short circuit. Though seldom required, the fuse may burn out or blow. A replacement fuse is kept inside the battery box and can be used to replace a bad fuse.

on two 12 volt sealed batteries. The transmitter may run about 4 hours while the receiver will run about 8 hours on a pair of batteries.

Once the voltage drops to 10.2 volts, the unit will automatically power down. If this occurs, recharge the battery before attempting to complete the GPR survey. Charge batteries as soon as discharged. When a battery is put on the charger, the Fast Charge LED will light up. If it does not light up after six hours or charging, the battery should be replaced. After eight hours, the Fast Charge LED will normally go out. Do not remove the battery as a trickle charge is being applied. A battery takes a minimum of twelve hours to fully charge.

varies with temperature and usage. Cold weather can greatly reduce battery life. From a practical standpoint, it is usually many hours before recharging is necessary. A second set of pulseEKKO PRO batteries may be needed for long field days or if the battery cannot be charged during breaks. The best practice is to always make sure to charge the batteries overnight! pulseEKKO PRO battery maintenance is of utmost importance. Batteries must be kept in a charged state to ensure a long and reliable life.

1. Do not allow sealed lead acid batteries to be left in a discharged state. Regularly charge batteries.

2. When the pulseEKKO PRO is not being used, unplug the battery cable. The system uses about 0.1 amps and slowly drains the battery.

5. Before storing a battery make sure it is fully charged. Store the battery in a cool place. 50 degrees Fahrenheit is ideal. Do not allow the battery to freeze.